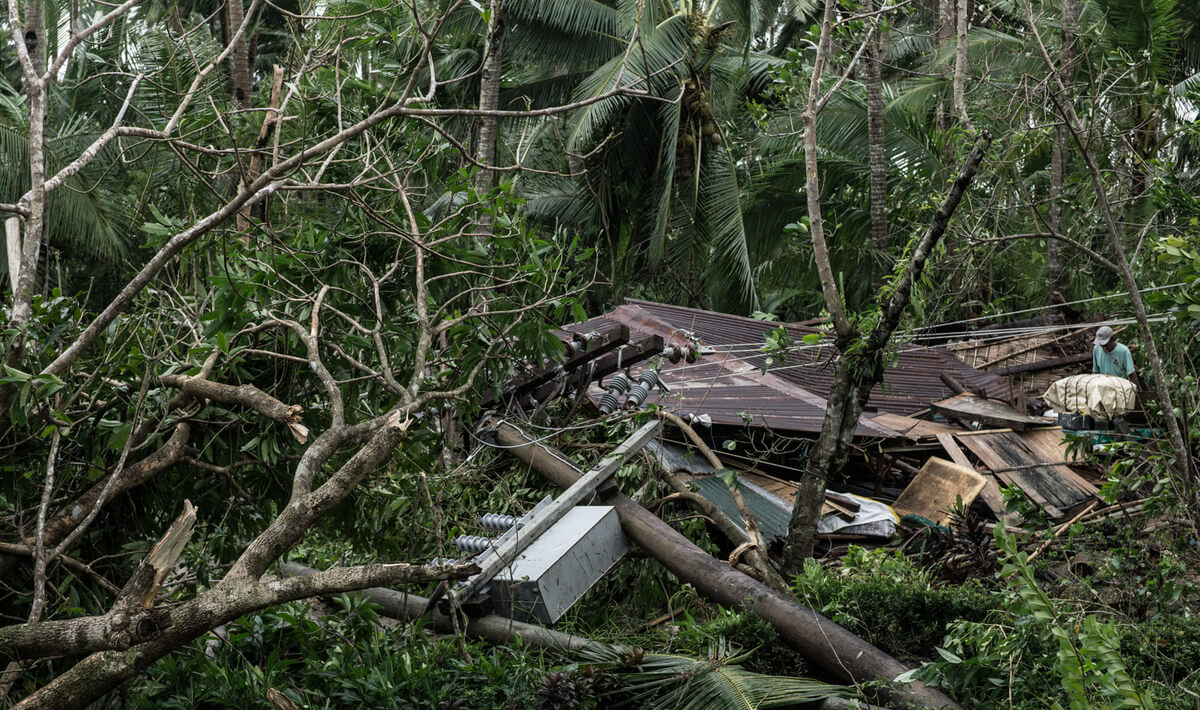 Growing Change Through The Eye of The Storm

The guy on the radio was speaking in Filipino (Waray) and I didn’t have a clue what he was saying.

The emotion in the room told me something intense was going on.

I was on a tiny island in the Pacific. Somewhere off the coast of Eastern Samar in The Philippines.

I was just just a year earlier, shortly after Typhoon Haiyan came ripping through the Pacific Ocean and made landfall as the World’s strongest storm in modern history.

I spent the morning visiting with young children at the island’s only school, and in the afternoon I went exploring with a Coconut farmer. The island was rugged and felt untouched. It was completely remote and the people were as cut off from the modern world as you could imagine. 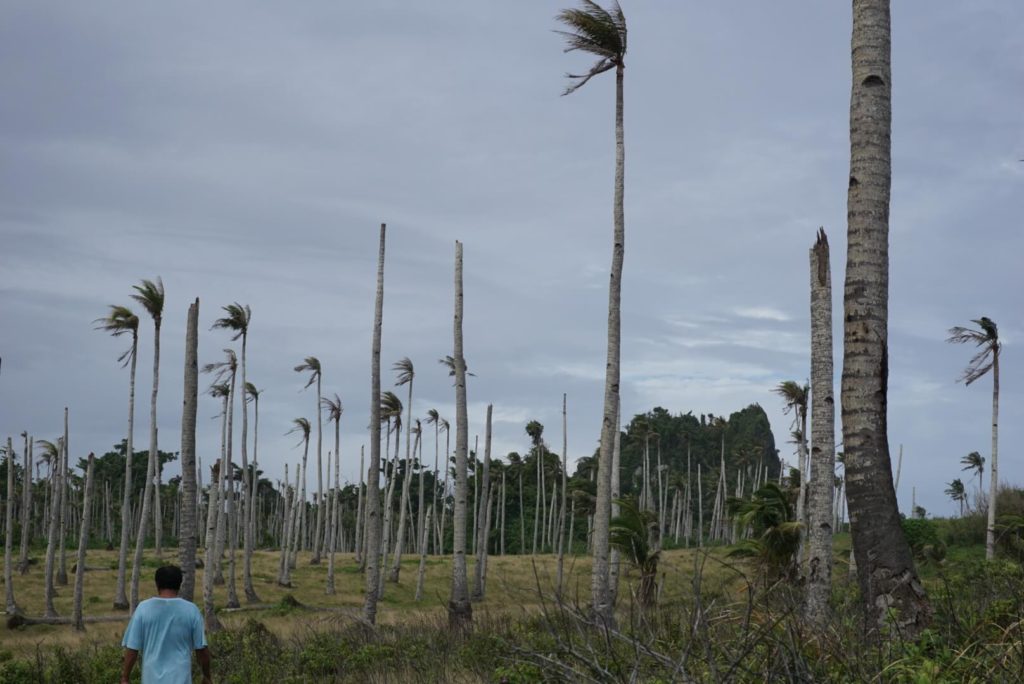 At the tattered edges of nowhere, broken palm trees shot out of the landscape like daggers, surrounded by their fallen comrades. A stark reminder of the death and destruction Haiyan caused. Remnants of houses and buildings were scattered near and far, painting a human connection to the serene chaos. As beautiful as the island was, it felt like a distant planet with a dark and troubled past.

So, when I heard there was a Super Typhoon headed directly toward us, and we were unable to leave due to rough seas, the harsh reality of my surroundings set in.

I recall drinking a lot of beer that night.

Come dawn in The Philippines, I’m typically awoken by Roosters.  Not my favorite way to wake up, but yelling and a sense of panic is much worse. But it was just before first light, and we had to get on a boat while we had a chance.

When most people say “The Calm Before The Storm” I don’t think they really know what they’re talking about. It just sounds good.

But it’s real. What a beautiful morning.

It was good to be back on the main island, but the Typhoon had intensified, now classified a Category 5 Storm, and stronger than Typhoon Haiyan. I was now trapped in the place I had seen destroyed just a year earlier, nowhere to go with a monster storm bearing down on me.

When we drove by 1 of 2 gas stations in town, my World became a movie. You hear about disasters, economic collapse, and even the zombie apocalypse; no cash, no gas, no food on shelves and people panicking for resources.

There must have been 500 people trying to get gasoline. This was survival mode.

I made some of the Filipino people I was with angry when I demanded that we leave their house for better shelter. Flashbacks of Haiyan and a glimpse of cracked concrete walls were reason enough to say something. I knew I wasn’t staying there regardless. 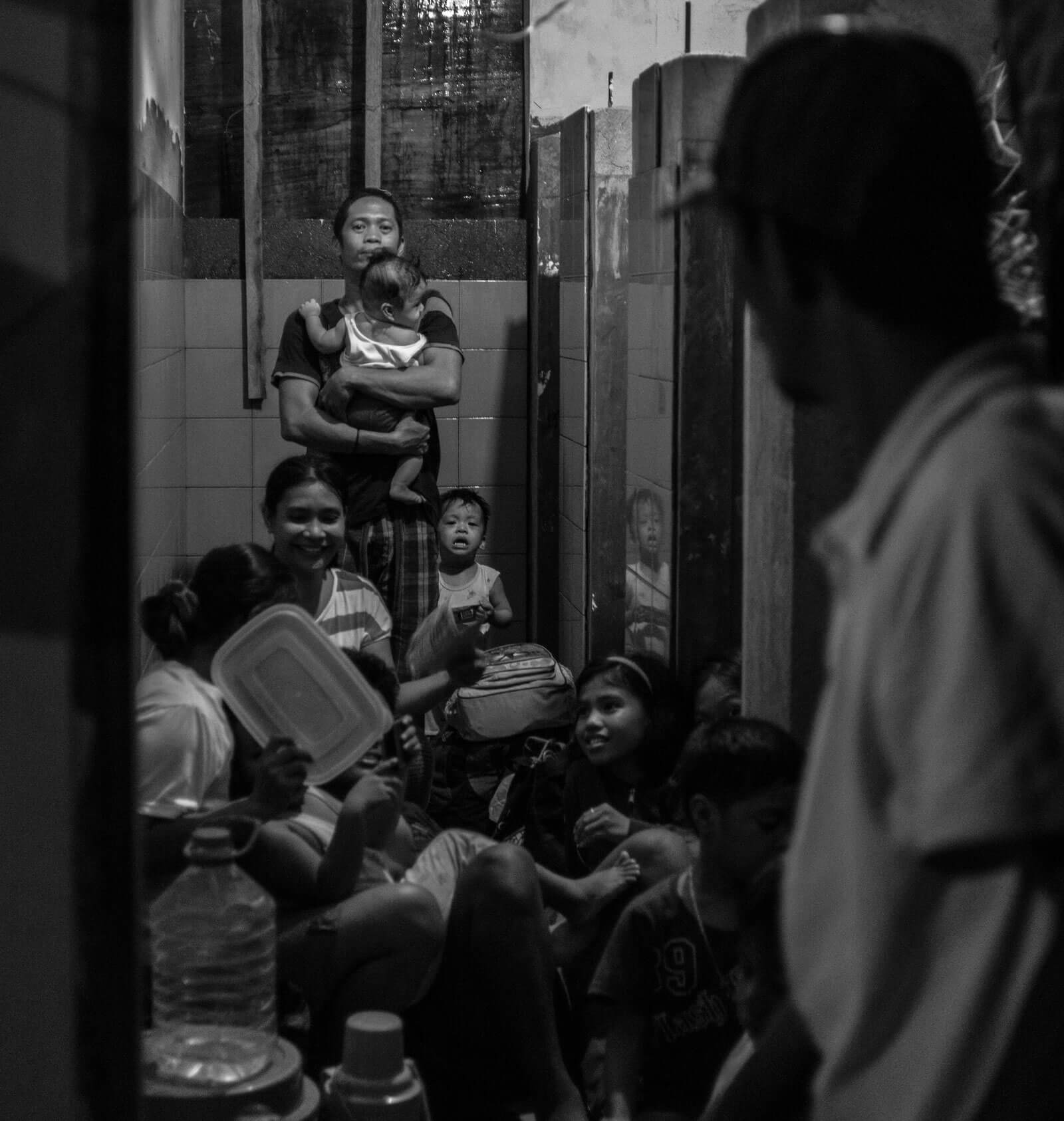 When the roof started to lift off the building and the windows were being blown out, the thousands of evacuees started to panic. We were in a government building turned evacuation shelter, and while second guessing my demands to leave the house, I was trying to calm people around me by telling them that the sound of the roof tearing in half was “just some loose sheet metal outside”.

What was I thinking? These people face Typhoons every year. They’ve seen the destruction.

This older man kept looking at me, shaking his head, and saying “many casualties”. I still believe my bullshit was better than his glass half empty way of thinking.

But my thoughts jumped to the night before; I had driven down the coastal highway and watched people set up tarps on the backside of small hills to take shelter. I realized he was probably right.

I’m not religious. But I prayed quite a bit throughout the 10 hour storm. Maybe it worked. Typhoon Hagupit was downgraded and only packed winds of 285 KPH when it made landfall about 15 KM north of Borongan City, Eastern Samar.

However, the worst of Typhoons typically lasts for about 2 or 3 hours. Hagupit’s incredible force battered us for an agonizing 10 hours. Children cried, grandmothers prayed relentlessly, boarded windows caved in, exposing us to the howling wind song while the building started to flood.

It was officially the longest night of my life. A waking nightmare that felt like falling. Perpetual wondering – will I wake up alive? or will the earth’s presence suddenly appear, ending life and dream?

The storm finally started to weaken around 6am. We had survived.

A sense of relief quickly turned to thoughts of all the people without shelter. I jumped in a car with the United Nations and headed out to assess the damage and see what kind of relief efforts needed to be organized. 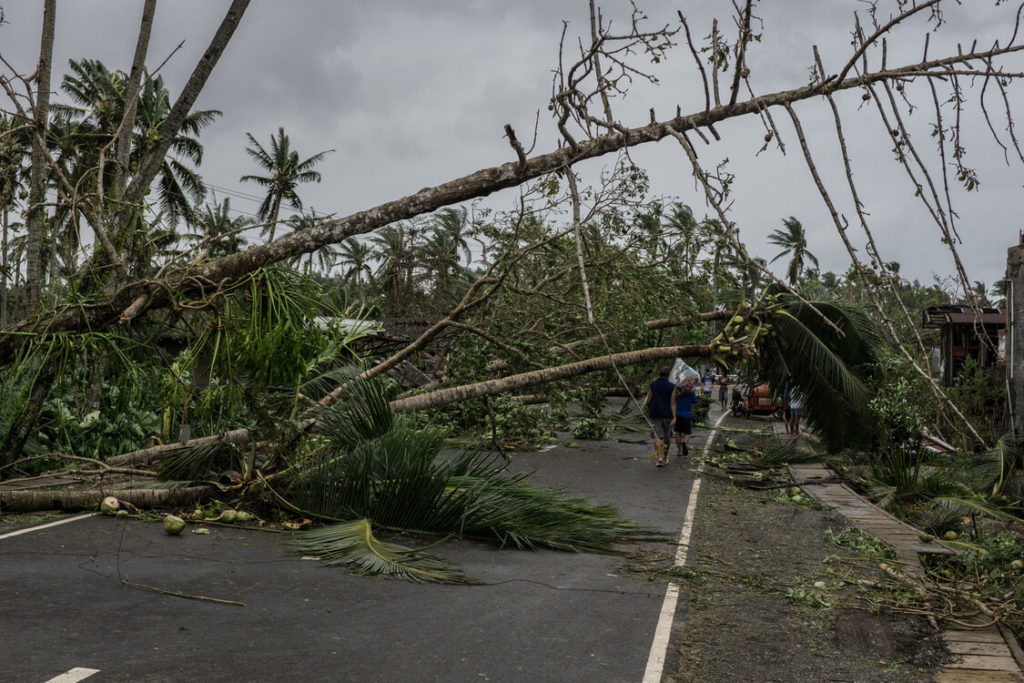 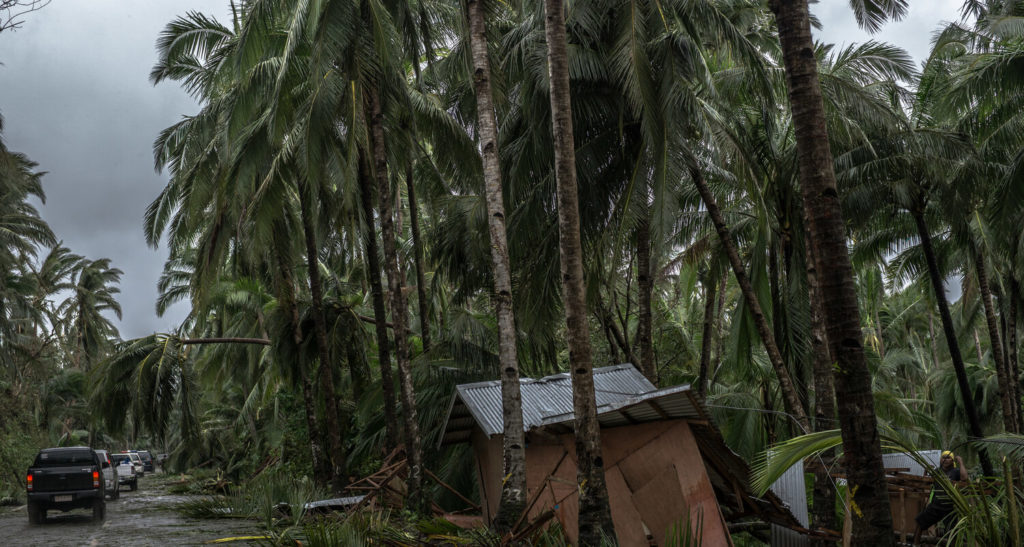 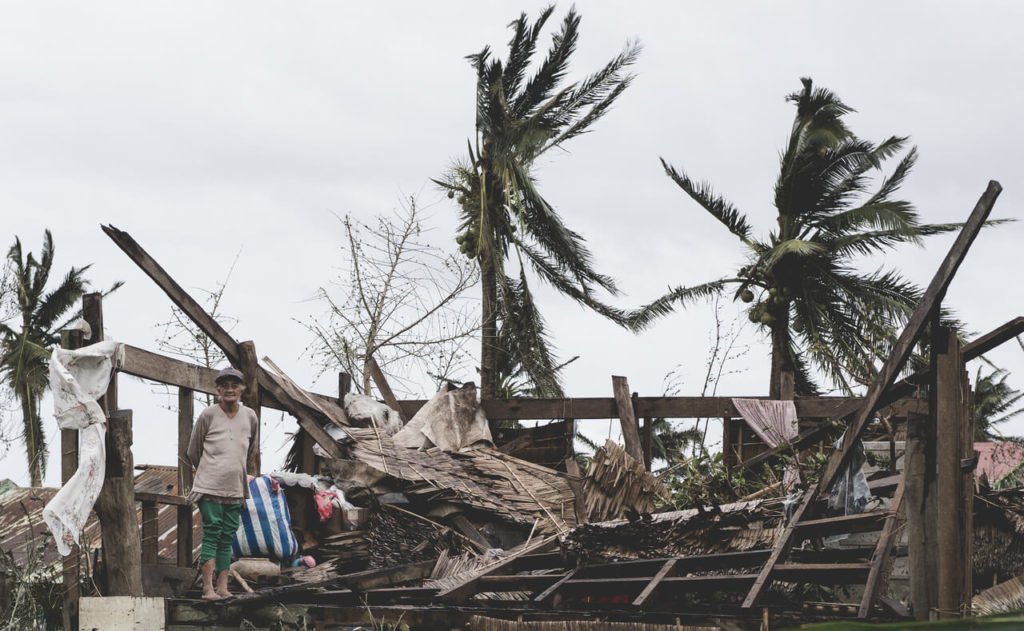 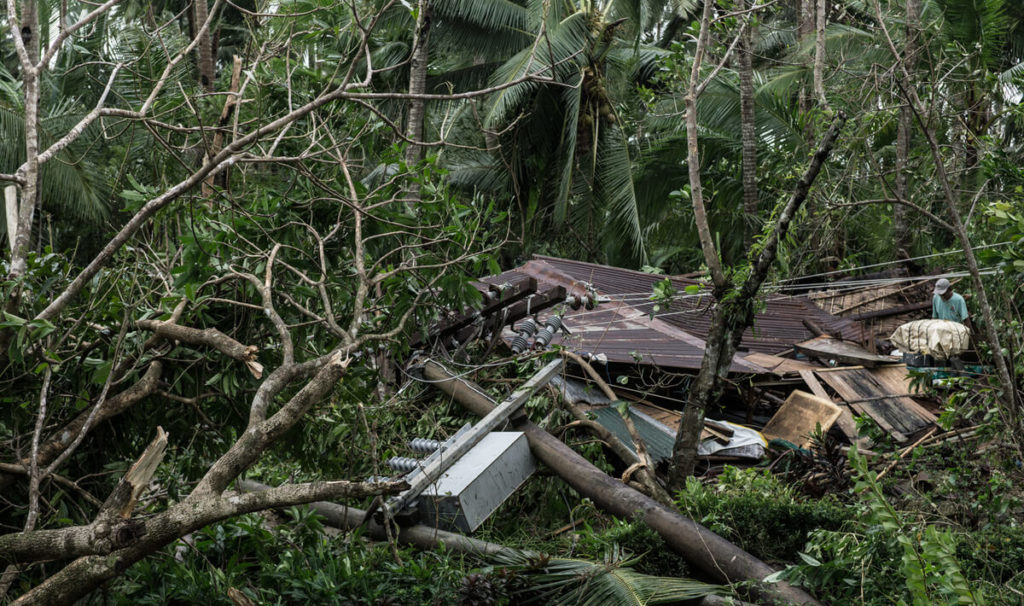 The road was blocked by fallen trees, power lines, and parts of houses. Sections of the road were gone. Bridges were caving in. It took us 7 hours to get 15 KM.

But throughout the entire drive people were outside clearing the damage, rebuilding their houses, waving and smiling as we passed by.

I thought I was dreaming.

I knew these people were strong and courageous. I had seen it after Typhoon Haiyan. But this was mind blowing. 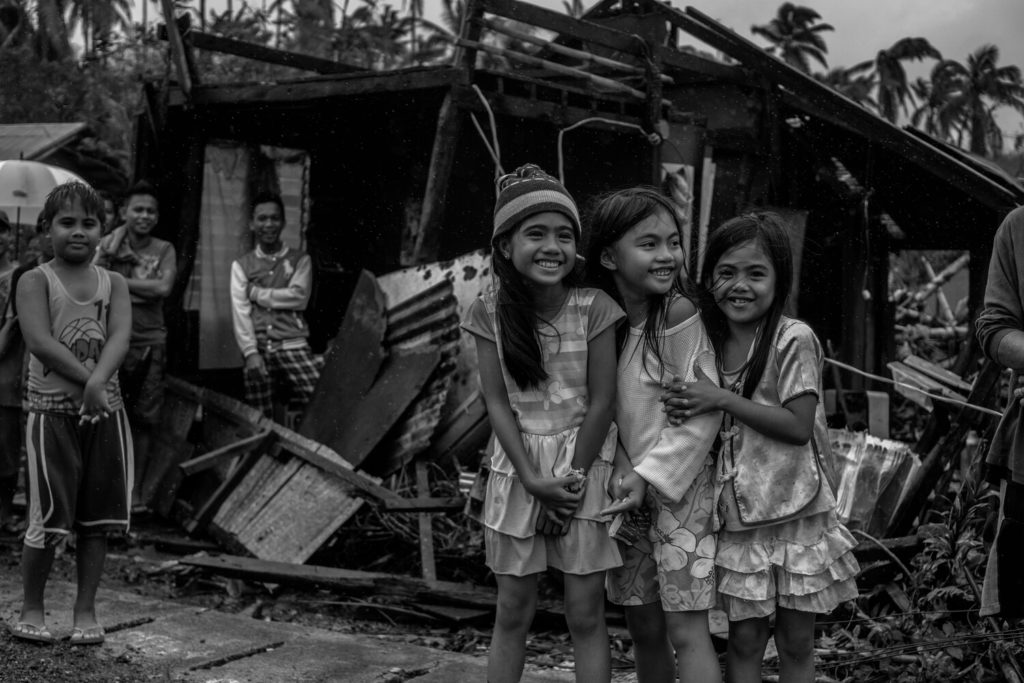 A sense of clarity came over me. I knew why I was here.

There were 33 million trees destroyed during Typhoon Haiyan, and in some places, Typhoon Hagupit did even more damage.

The idea to plant coconut palm trees was starting to look like a really good (and necessary) idea. 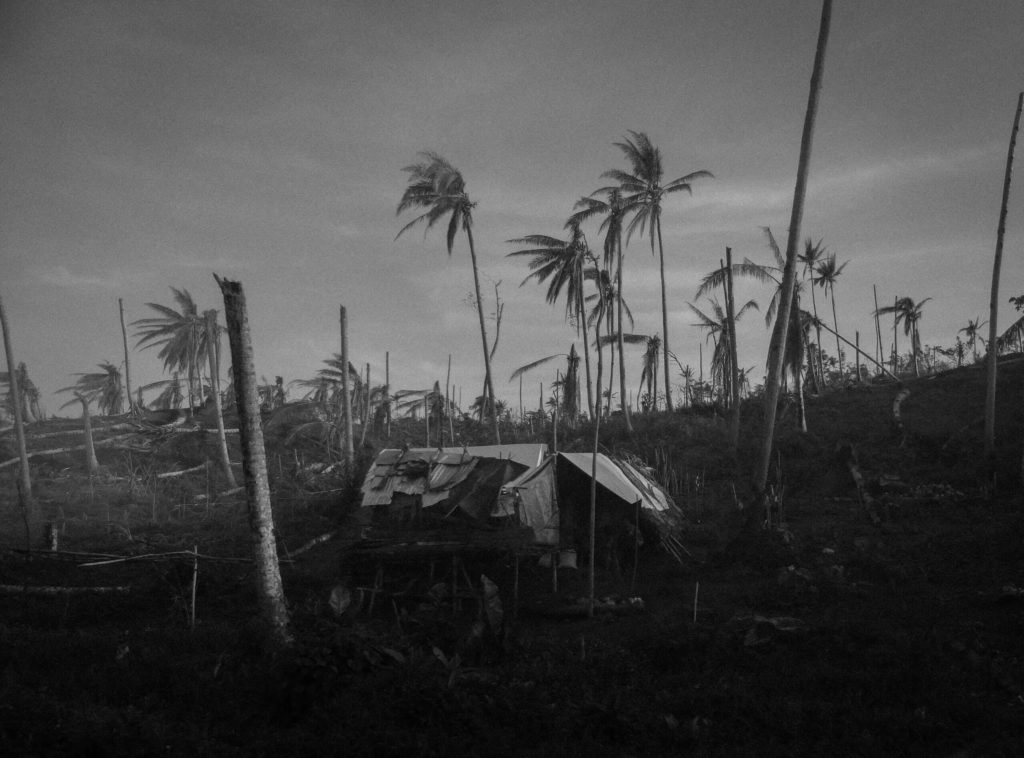 Despite all of the destroyed coconut palm trees, there was already significant need for a dedicated planting program. Without it there will be no sustainability with coconut farming. Eastern Samar is one of the leading coconut producing regions in the World, and also one of the most impoverished.

But the coconut palm is truly the Tree of Life. When Typhoons wipe them out and there is no coconut left, livelihoods are destroyed and families go hungry. Education for children reduced to a distant dream about another moment in time.

Yet, while I knew that planting coconut palms would help, the more time I spent with coconut farmers, the more I realized that planting trees alone would not sustain their way of life.

The coconut industry itself has become far too industrialized and controlled by a few large companies.

Coconut farmers work extremely hard for a product with a very low historic value, and over 60% live in extreme poverty, with no choice but to live on a sustenance income of less than 2 dollars per day.

Opportunities for economic growth or community development are severely limited. Women are unable to take part, and children are often unable to go to school.

It has been this way for hundreds of years. The coconut industry is engrained in customary culture, while pride runs deep throughout the coconut farmers I have come to know.

They won’t tell you about the difficult parts of coconut farming, or the constant struggles they face.

They’ll only tell you why they love it and what they are thankful for.

But they have continued to live in poverty for far too long. To better the coconut industry means to give these people, their culture and their futures a new light and hope.

Follow our mission, as we seek to implement change for a better world, not just through our One for One Coconut Tree Planting program, but also by working in partnership with  coconut farmers and their communities, with a goal of helping to improve their livelihood; building stronger, more self-sustaining communities and giving hope for the future to their families as well as our global environment as a whole. 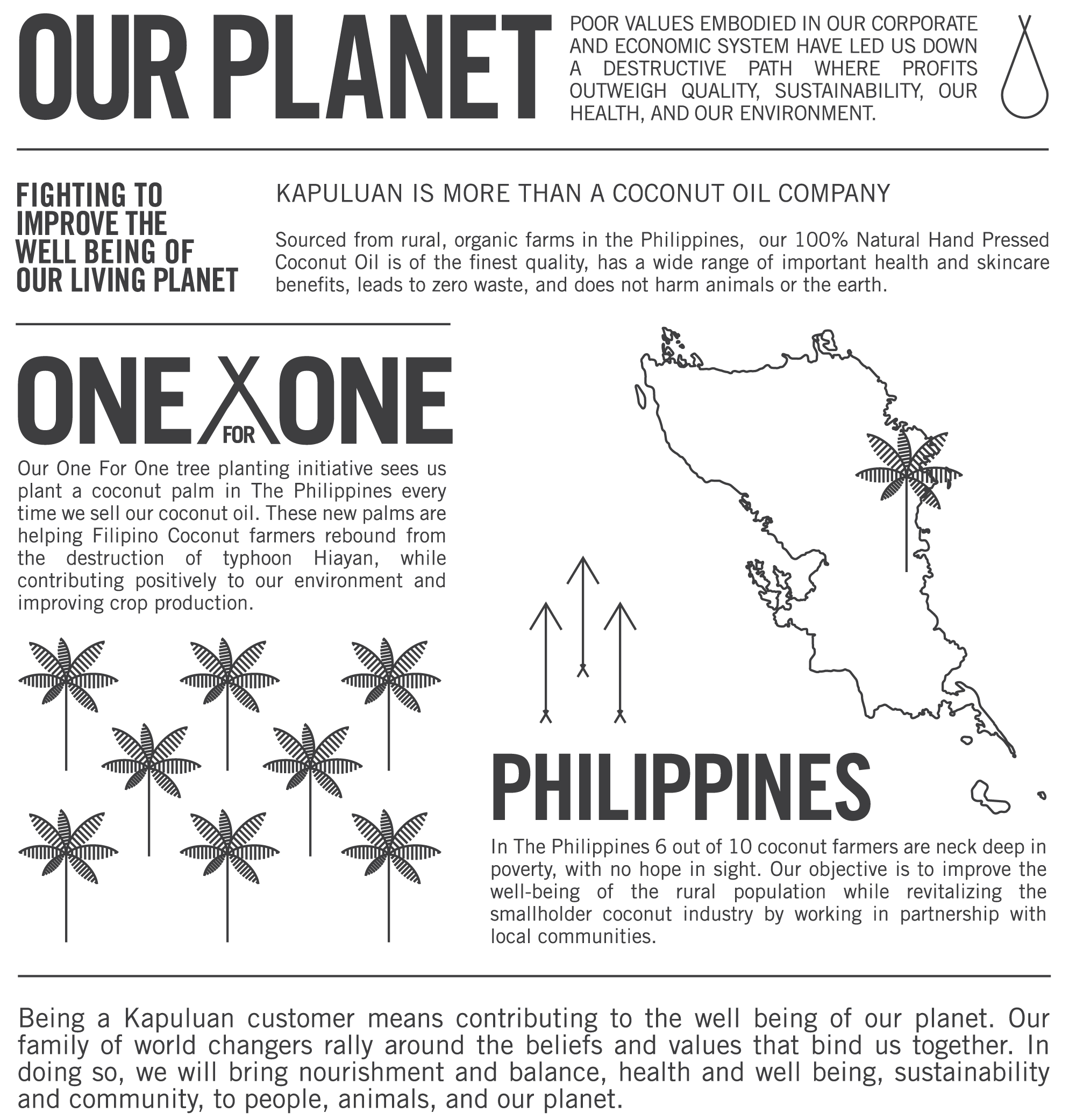